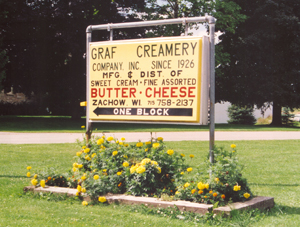 In 1926 Albert Graf bought a simple cheese factory to begin his cheese making operations. It wasn’t until 1928 that he began producing the butter that has been the cornerstone of Graf Creamery ever since. In the beginning Albert and his wife Emma managed the factory until 1953 when the Graf’s daughter Marge married Robert Bleick of the Bleick Creamery. Robert sold his stock in the Bleick Creamery to work with Marge’s father in managing the plant at Graf Creamery. That tradition of family owned and operated business continues to this day with Jim Bleick, Marge and Robert’s son, serving as president, Ruth Bleick, their daughter, serving as Secretary Treasurer, and Marge Bleick serving as Vice President.

Graf Creamery is a United States Department of Agriculture federally approved butter manufacturing facility. This is a high honor for any creamery, and requires the plant to be routinely inspected by USDA inspectors periodically to maintain this rating. Recently, the government has made labeling a product to their strict specifications mandatory. Graf Creamery’s salted butter won a Best of Class award at the 2001 United States Championship Cheese Contest and also won Blue Ribbon awards at the Wisconsin State Fair in Milwaukee in five out of the last ten years. In the future, Graf Creamery expects to be just as successful in its growth in the twenty-first century as it has been in the past seventy-five years. Though the operation has expanded beyond the simple hand operated churns into a full scale automated production facility, its the family approach that makes cream into our award winning Graf butter.